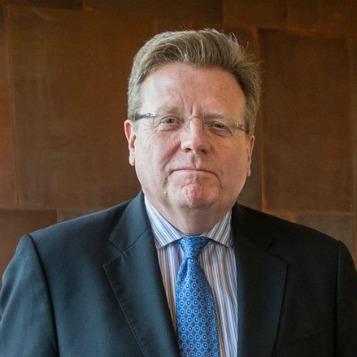 Leading a Revolution in Engineering Research

When the University of Chicago decided to create a new interdisciplinary molecular engineering program from the ground up, they retained Isaacson Miller to find the right the person to run it. After a national search led by Vivian Brocard, Dr. Matthew Tirrell took the helm as the Institute for Molecular Engineering's (IME) founding director in 2011. Over the last four-and-a-half years, Tirrell has transformed IME from a paper blueprint into a thriving interdisciplinary hub where students and scholars are working on high-stakes societal problems such as water and energy storage. Isaascon, Miller recently spoke with Tirrell about the challenges of steering the ship of an academic startup and what he's learning about adaptive leadership.

Tell us a little about your background.

What is IME trying to create?

We're trying to create a revolution in engineering research and education. A distinctive feature of IME is our focus on molecular-level science. We're not building 787 airplanes or bridges. We're focused on small-scale systems engineering. IME is trying to solve societal problems such as better information technology, healthcare, and environmental and sustainability options.

Tell us about an IME project you're especially excited about right now.

My favorite project might be one where we're trying to lead the way in computer and information technology beyond Moore's law. Computer chips have been getting smaller at a predictable rate over several decades. This is going to stop because there's a point where you can't make structures any smaller on an atomic level. Computing is going to experience a change from digital computing, which has to do with transistors, to quantum mechanics. A quantum bit could store millions of pieces of information, but we need to develop techniques to successfully manipulate quantum states in materials.

What's your vision for IME?

Many of the problems that need tackling, such as quantum computing, need skills from a wide variety of engineering traditions. Chemistry, physics, and materials science are usually separate university departments. At IME, we're converging them into one. It's not so much that we've discovered some problems in society or technology that no one has addressed before. What distinguishes us is that we're creating a new organization to address those problems more effectively.

What are you learning about leading an interdisciplinary organization?

My biggest lesson learned is that it can be pretty easy to attract high-powered academic people at all levels, with the right vision. That's how academic leaders are -- they're interested in new stuff. We've gone from one person to 170 people on payroll in four-and-a-half years. But among all of the people I explore possibilities with, about 30-40 percent say they don't want to join a startup. There's risk with a startup. A startup might fail. IME probably won't fail, but there's plenty of reputational risk in that what we're doing could turn out to be lousy.

How are you managing those risks?

What are you learning about being an adaptive leader?

That could be one of the biggest learning experiences in this position. I adopted the model that we have themes and not divisions within IME. Our themes are: organic materials, quantum materials, immunological engineering, water, and energy storage. We're doing well on the first three themes, and we are building in water and energy storage. Those are both important problems, and we have good conditions that might help us to become preeminent in those areas, but that hasn't happened yet. If it doesn't happen in a year or two, we might pull the plug. This isn't like getting rid of an academic department; IME doesn't have a water department. The people we've hired are capable of doing other things and will adapt. We haven't done anything that's irreversible in any of our areas.

What's your dream for IME?

If you want to get into dream territory, I sometimes say that we're trying to create a broader liberal arts form of education. At IME, we have a chance to create a brand of engineer who is not only intellectually skilled, but who is also more socially skilled in writing and communication. We want the engineers we're training to come away with a greater and deeper understanding of humanity than what most engineering schools can offer.

My extreme chutzpah statement is that I'd like to produce the engineers that the Stanford and MIT-trained engineers will be reporting to. That's because our graduates will be capable of dealing with the broad range of issues, from technological to sociological, that affect any organization. It will take awhile to get there, but that's the dream.